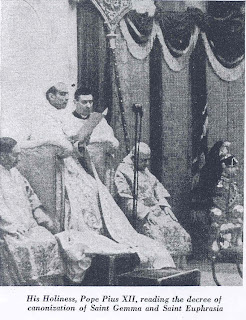 Description of the Canonization of Saint Gemma Galgani

(Originally published in "The Sign", July 1940. The webmaster would like to thank the Passionist archives of Union City, New Jersey for providing this article.)

Two wonderful lives associated in a magnificent ceremony, one of the most superb enacted by the Sov­ereign Pontiff in the most splendid of temples, St. Peter's in Rome. At first glance they would seem to be contrasting entities; and yet they stand well together, as they do in the great banner that hangs over the portal of the basilica. But cer­tain special characteristics the two Saints have in common: both vir­ginal souls drawn singularly and potently from their first years to the one love of their Celestial Spouse; both ardent lovers of the Cross, of the most Blessed Eucharist, and of the "dear Mother" Mary; both over­whelmingly eager for the salvation of souls for which Christ died.
But while the Holy Spirit moves Mother Pelletier, religious and Foundress, toward wide horizons, toward missionary work and foundations afar, and gives her for her portion innumerable daughters.
­Gemma, a little girl in modest surroundings, in an old-world provincial city of Italy, is called by the Beloved to a hidden life of extraordinary intimacy with Him. Vividly realizing what He suffered to buy back a fallen race, she offers herself spontaneously to share His sufferings, en­treating Him to divide them with her. And He hears her prayer. The day will corne when He will reward her lavishly, but in the meanwhile she will share His painsl Wounds that shed living blood, the Scourging, the Crown of Thorns, the Agony upon the Cross.
Her Passionist biogra­pher has said justly that God has thrown this mod­ern-day child in the teeth of a materialistic and un­believing generation to show that His ann is not shortened and that He will have Saints who are' pure mystics, now, as He did in the ancient ages of Faith. The French Foundress of the great Order of the Good Shepherd, and the little Tuscan girl stand together today upon the banner that hangs over the entrance to the world's Ca­thedral.
The ceremony of Canonization is one of the most solemn ever per­formed and the crowds pouring into the basilica from the first opening of the doors testified to the eager­ness of the faithful to be present. The interior of St. Peter's offered a magnificent sight. Hangings of crim­son and gold, Flemish tapestries only exhibited on rare occasions, and illumination more brilliant than day­light in the forms of thousands upon thousands of electric candles grouped in crystal chandeliers. The statue of St. Peter wears the tiara, the jewelled ring and the crimson cope of state; the pontifical altar gleams with gold and lights.
Two thrones have been prepared for the Sovereign Pontiff; one at the head of the apse, under the window of the Holy Ghost and the Chair of Peter-elevated considerably so that all may see him; and a smaller one nearer the altar where he will vest for Mass. The tribunes are full, and looking toward the nave and aisles, the crowd there is so great that one gets the impression of a sea of faces. 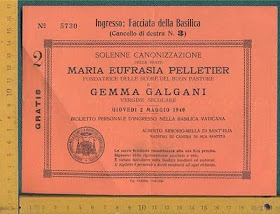 Nearest the throne, and to the right of it is the section reserved for the Pope's relatives. Next to that the Tribune of the Postulation, all those who have worked in the interest of the two Causes. It is a joy to note the many Passionist Fathers standing shoulder to shoulder, to be congratulated today for the noble work they have done, for the little Saint of the Passion is surely theirs; and the groups of the Good Shep­herd Sisters, all white in their immaculate habits and mantles, many Ameri­can Superiors among them. Opposite these the tribune for the diplomatic corps in uniforms, gold-embroid­ered coats and decorations. The seats reserved for the Cardinals and Bishops run in parallel lines at right angles wi th the high throne.
Pius XII is exceedingly punctual. The procession was to leave the Sistine Chapel at eight o'clock, Long before it came into sight, repeated storms of clapping reached our ears. From the first day of his accession, the Pontiff sig­nified his desire that there should be no shouting or cheering in St. Peter's. The majority abstain from these demon­strations, but he has not been able to stop the hand-clapping and the waving of handkerchiefs with which his children manifest their joy at seeing him. A few cries of: "Viva il Papa!" still break forth irrepressibly, but the clapping of hands by thou­sands of enthusiastic persons grows to a volume of storm.
Presently the silver bugles in the gallery sent the opening bars of the pontifical hymn floating ethereally down the nave. By that signal we knew that the Pontiff had crossed the threshold of the basilica. The clapping grew to the sound of a roaring wind. Then came a silence. Pius XII was alighting from the Sedia Gestatoria to kneel in adora­tion as he passed the Chapel of the Blessed Sacrament. The hush lasted several minutes, then all the sounds resumed: the chanting of the Can­tors as they advanced, the slow, religious hymning of the silver trum­pets, and that insistent clapping into which voices of boys occasionally flung their irrepressible cheers of welcome.
It would be idle and certain I y an impossibility to describe the splen­dor of this procession: high clergy, holy religious, all the officers and personages of the pontifical court The so-called Mendicant Ord­ers open the cor­tege: Franciscans, Dominicans, Au­gustinians, Car­melites, Servites, Minims; then representatives of the great monas­tic Orders-Bene­dictines, Olive­tans, Cistercians, Vallombrosans, Camaldolese: and the Canons Reg­ular of the Later­an under its true name of Saint Saviour. 'The Cross between two acolytes pre­cedes the Pontifi­cal Roman Semi­nary, followed by the Parish Priests
of Rome, the Canons of the various basilicas, and the members of the Congregation of Rites.
At this point the banners repre­senting the two new Saints are car­ried, accompanied by notables or living members of their family. The Foundress of the Good Shepherd is kneeling with an ecstatic face lifted to a vision of the Hands of God out­stretched to receive her. All the works she left behind her arc repre­sented by kneeling figures: Sisters of the Good Shepherd, Magdalens, penitents, Preservation class, orphans, Consecrate helpers, native Sisters of St. Ann in India, Xaverian native teacher Sisters in Ceylon, colored and Chinese children. St. Gemma kneels, upon her banner, with eyes and clasped hands raised toward a vision of Our Saviour upon the Cross. 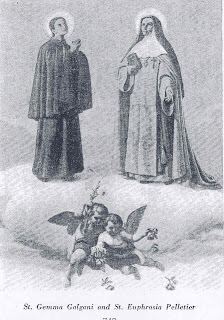