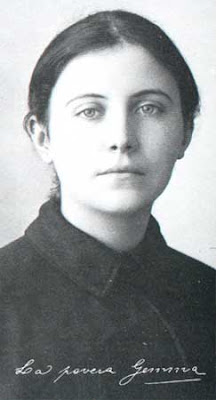 In the prologue of a new book called “The Rite-The Making of an Exorcist” (2009- Random House/Doubleday Inc), journalist Matt Baglio describes an exorcism of a 35 year old woman named 'Anna' in Italy in 2005.

“The exorcism had been going on for the better part of an hour, and the strain was beginning to show on everyone. Should he continue?
Suddenly, the woman’s head turned, her eyes fixating on a spot near the far wall. ‘No!’ the demon said in a deep, guttural voice coming from deep within her-

“The one in black is here, the jinx!’
The exorcist felt a momentary ray of hope, knowing from past exorcisms that this was the demon’s code to describe Saint Gemma Galgani.‘And, the little white one from Albania!’ the demon roared.
‘Mother Teresa of Calcutta?’ The exorcist asked.
The demon let fly a string of blasphemies in a rage, then his voice took on a mocking, childlike tone ‘Oh, look at them. Look at them! They are hugging and greeting each other!”
Then, back to a deep guttural rasp ‘Disgusting! Disgusting!’
To the woman lying on the table, the two figures appeared as if in a dream. Saint Gemma was dressed in her traditional black, and looked pretty much as she did in her twenties. Oddly, Mother Teresa also looked very young -perhaps only twenty five.”A few minutes later, the late Pope John Paul II appeared, whom the demon mockingly called “Totus Tuus”, and then finally while “the woman felt awash in an incredible feeling of love, the figure of the Virgin Mary appeared before her, wrapped in a gold and white veil that covered half of her face. Watching in amazement as the figure approached, the woman was even more surprised to see that Mary was gazing at her tearfully.”

The appearence of the Blessed Mother seemed to make the demon more angry, but at the same time made him weaker, almost powerless. Momentarily coming back to her senses Anna said- "A tear from Mary is all it took," before lapsing back into a trance.

____________
"The Rite -The making of an Exorcist" tells the true story of an American Priest, Father Gary Thomas, who in 2005 was appointed by his bishop to become the official exorcist for the Diocese of San Jose, California. The book details his year long stay in Rome for study and training to become an exorcist. The author, freelance reporter and journalist Matt Baglio, tells Father Gary's story in a third person, eyewitness reporting style. The book is a simple and engaging “matter-of-fact” look at the life, training, and experiences of a modern exorcist.
(Taken from “The Rite-The Making of an Exorcist” 2009- Random House/Doubleday Inc.)
_____________
St Gemma, St Padre Pio, Blessed John Paul II and St Faustina assist together in an exorcism
Next, in another even more recent book we find St. Gemma together with St. Padre Pio, Blessed Pope John Paul II and St Faustina Kowalska assisting at an exorcism. The newly published book (2012) written in Italian details among other things a man’s deliverance from a legion of demons though years of exorcisims. The book is entitled “La Mia Possessione” (My Possession) by Francesco Vaiasuso, Milano: Edizione Piemme 2012. In chapter 13, pp.228-229 we find the following incident. These were the last exorcisms in which the man was finally delivered from the demons that took possession of him since he was 4 years old and was taken to a Satanic Ritual by a friend of his mother who wanted to seek revenge on their family. This happened in April of 2005, just a month after the death of Blessed Pope.John Paul II. This event occurred while the man was with Fr. Benigno for an exorcism:


“I was at Fr. Benigno, completely dissociated. Suddenly, my face became relaxed, smooth as wax. I had a vision. In front of me there were four saints or almost saints…Padre Pio of Pietralcina, Sister Faustina Kowalska, Gemma Galgani, and John Paul II. Padre Pio and Wojtyla were in front. Padre Pio at a certain moment signals John Paul II to come forward. Without speaking but communicating mentally, he (Padre Pio) tells him, “It is your turn. It is your moment.”

Padre Pio and Wojtyla looked at each other with great respect. Their friendship, which existed on earth, continued in heaven. Wojtyla takes a step towards me. He is tall, strong, not too young but not old either, dressed in white, dressed as a Pope. His face was radiant, giving off light in a way I can’t describe.

The demons were shocked, terrified, and shouted at the same time: “We are leaving. Wojtyla is destroying us, let’s escape.” Theirs is a cry of horror, of someone who screams while falling without hope down a precipice into some deep hole. And I remained there, liberated in one instant.”

-Taken from “La Mia Possessione” (My Possession) by Francesco Vaiasuso, Milano: Edizione Piemme 2012. (-Special thanks to Angelica for translating this excerpt)

An exorcist at the Monastery-Sanctuary of Saint GemmaEncouraged and edified by this recent account of the assistance of Saint Gemma in the battle against evil, I was prompted to contact Padre Alfredo Pallotta C.P., a Passionist Priest who, until 2007 was for 13 years the Chaplain at the Monastery-Sanctuary of Saint Gemma in Lucca, Italy. Interestingly, Padre Alfredo is also a longtime exorcist, especially assigned to this ministry by the local Bishop. 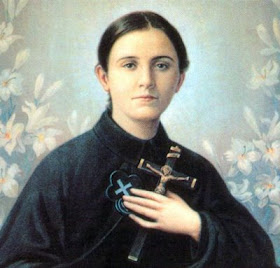 In his assigned capacity as exorcist, for 13 years Padre Alfredo performed countless exorcisms in a special room at the Monastero-Santuario di Santa Gemma Galgani in Lucca. For years, people from all over Tuscany have sought him out in their battle against the demonic. He is also known for his extraordinary devotion to Saint Gemma, and has written numerous booklets and prayers in her honor. Padre Alfredo has also recently written a book entitled “Un Esorcista si Confessa” (An Exorcist Confesses) Edizione Fuori Commercio, 2005

So, in light of his experience in the battle against evil and his extraordinary devotion to Saint Gemma, I decided to contact Padre Alfredo for a written interview, and he kindly replied to my questions.

"...Do You know, Jesus, who has forbidden me to think about sinners? The devil. On the contrary Jesus, I recommend them to Thee. Think of them, oh Jesus, poor sinners, and teach me to do as much as possible to save them." -St Gemma Galgani
Share