Patron Saint of headaches and migraines 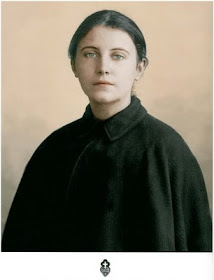 A Patron Saint for headache and migraine sufferers

Given all the migraines and headaches that she suffered, Saint Gemma can certainly be considered a patron Saint for those who suffer with headaches, along with St Teresa of Avila and a few others. Gemma suffered with severe headaches for three reasons- firstly because she was diagnosed with spinal meningitis (or possibly spinal tuberculosis), and she developed large tumors along her spine, which lead her to the brink of death in the Spring of 1899, prior to her miraculous cure. Those who are familiar with spinal diseases know that they can cause severe, debilitating migranes.

Additionally, for various reasons the doctors thought she also had a brain tumor. And thirdly because she was given the mystical grace of receiving the crown of thorns. Because of all of these conditions, St Gemma suffered atrocious headaches. And because her spinal disease was continously progressing for the worse, she initially could still walk and began wearing a iron back brace, but soon she became bedridden and almost completely paralised, able only to move her head and arms a bit. During this time she said to Father Andrew Bartolini: "See I am crucified. I cannot move." Initially her Physician, Doctor Del Prete repeatedly lanced the tumors along her spine, and injected them with glycerine, but as she continually grew worse he consulted with other physicians who together decided to cauterize her spine in 12 places.

Here is how she explained it:

"....but the months passed, and I did not get any better. On January 4th (1899), the doctors tried another remedy. The cauterized me in 12 places on the spine. That was enough. I began to grow worse. Besides the usual pains, on January 28 I began to suffer with an unbearable headache.

The doctor whom they called said that it was very dangerous (he called it a brain tumor). They could not operate because I was suffering with extreme weakness. I grew worse from day to day, and on February 2nd they brought me Holy Viaticum. I made my confession and I was waiting to go and be with Jesus. It seemed that it would be soon. The doctors, thinking that I was no longer conscious, said among themselves that I would not live until midnight. Blessed be Jesus!"

Her severe headaches lasted for months, until her miraculous cure on March 3, 1899. Immediately after her cure she said: "When I was alone in the room afterwards I was able to raise myself to a sitting position, though I could not yet stand up. But, I felt very well because I no longer had any more pain in my head."

But this was not the end of her head pain and migraines--now she was to suffer tortuous headaches stemming from a mystical grace- the Crown of Thorns. The severe migraines stemming from her spinal meningitis and brain tumour were only a precursor of the violent headaches and head pain that she was soon to suffer.

The Crown of Thorns -Sufferings of a victim soul

After her miraculous cure God called Saint Gemma to be a "victim soul", that is, she was especially called to suffer in body and spirit for the conversion of sinners, and in reparation for sins. In other words, she was called to help Jesus for the salvation of souls. To accomplish this mission, God would give her a share in the innumerable sufferings of Christ, beginning particularly on Thursday evenings until Friday afternoon. It was the Passion renewed, in a lesser degree, in the body and spirit of the young virgin Gemma. In this mission of suffering in union with Jesus for the redemption of sinners she was given the Stigmata, along with the Crown of Thorns. It is this latter, and the atrocious head pain that it caused, which we will now focus on for this article.

Concerning the Crown of Thorns and the accompanying head pain Gemma writes:
Thursday, August 30, 1900
"A little strength, a little courage comes to me when I feel Jesus at the hour when he places the crown of thorns on me and makes me suffer until Friday evening, because this I offer for sinful souls, especially my own. This is how things went yesterday evening, Thursday; I thought Jesus would do like usual that evening: He placed the crown of thorns on my head, the cause of so much pain for my beloved Jesus, and left it there for several hours....How He was afflicted! And the cause: for the many sins committed, and the many ungrateful souls whom He assists, only to receive in return exactly the opposite. Of this ingratitude how much I feel guilty myself! For sure, Jesus must have spoken of me. As usual, that night I cannot sleep because I am united with Jesus, united more closely than usual, and also because my head aches a bit; I kept vigil together with my beloved Angel."

Elsewhere in her diary she writes:
Friday, July 27, 1900
"This Friday I suffered even more, because I had to do some chores and at every moment I thought I would die. Indeed, my aunt had commanded me to fetch water: I felt so exhausted I thought the thorns went into my brain...and a drop of blood began to appear at my temple. I hurriedly cleaned up so she barely noticed it..."

and again:
Thursday, August 2, 1900
"I be­gan my prayers and immediately collected myself. For a while I had been feeling ill. I stayed all alone; when I was suffering Jesus wasn't there and I suffered only in my head. My confessor asked me this morning if I had had the signs, [Stigmata -editor] and I said no. They hurt a lot but not compared to my head." 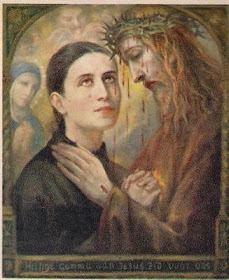 Thursday, August 23
"Tonight Jesus placed his crown on my head at about 10:00, after I had been collected for a little while. My suffering, which in no way equals Je­sus', was very strong: even all my teeth hurt; any movement brought a sharp pain; I thought I could not resist but instead I did, everything went well.I offered those little penances for sinners and in particular for my poor soul. I begged Him to return soon…"

Writing to her spiritual director, Father Germanus Gemma says:
"On Saturday evening, I went to make a visit to the most holy crucifix. There came upon me an ardent longing for suffering, and with all my heart I implored of Jesus to satisfy me. And, since that evening, He has granted me a cease­less pain in my head, but such a violent pain! And I am almost always crying through fear of not being able to bear it."

And in a letter to her Confessor, Monsignor Giovanni Volpi, Gemma writes:
"Saturday I went to make a visit to Jesus Crucified. There came to me a strong desire to suffer and with all my heart, I asked it of Jesus. And Jesus that evening made me have a very violent pain in the head, and blood almost came; but I was almost overcome and afraid that I would not be able to endure it. Tonight I suffered all night; I asked Jesus if I might have a little peace; and He gave it to me. I do not know whether Signora Cecelia saw me at this time; since yesterday evening I have been with her at her home, as you know.

If you think it wise, should I ask Jesus to alleviate a little the pain in my head?

Tonight I told Jesus that I really could not bear it any more, and He replied to me: "My daughter neither am I able to endure any longer the evil that is done Me; this is indeed a time of wickedness [it was carnival time] which I am no longer able to tolerate. You with your suffering bear the punishment which My Father has pre­pared for so many poor sinners. Will you not do it will­ingly?" I said yes, but I was afraid of not being able to stand it. He said: "Do not be afraid, I will make you suffer, but I will give you the strength to endure it." Now I am satisfied and even stronger.
I ask for your blessing and pray to Jesus for poor Gemma"

And concerning these pains in the head, what does Ms. Cecilia Giannini, the primary eyewitness to these matters have to say?:

Cecilia Giannini writing to Father Germanus in June, 1900:
“Today is Thursday and this evening she prepared her­self for suffering as one prepares for a feast. I am alone here. If only it were possible for you to be here, there are so many things that you could understand and that you could explain to me who understand so little .... Jesus on Thursday evening gives her His crown of thorns and presses it a little and then there flow little fountains of blood, so that it pours over her face and pillow; and sue suffers thus for an hour. Then Jesus blesses her and the members of the Sacred College and leaves her; how­ever He does not take away the crown. He leaves it until Friday. During the day no blood is seen, except a little when He takes the crown away, which is around three or four o'clock on Friday. During all this time she suffers great pain in the head, but no one knows it but myself. Enough of this: I am afraid I have said too much, but you will form your own judgment.”

And so, given all the headaches and pains that she suffered, we can see that those who suffer with headaches and migraines have a compassionate and understanding heavenly friend in Saint Gemma, for she certainly can sympathise with those who have such sufferings. And those who suffer such pain should recall Jesus words to Gemma:
"Do not be afraid, I will make you suffer, but I will give you the strength to endure it."
Or, in the words of the spiritual classic "The Imitation of Christ":
"Nothing is small that comes from the hand of God. If He sends us affliction or suffering, we should accept it with gratitude; for whatever He permits to happen to us is always for our salvation." -"The Imitation of Christ", Book 2, Chapter 10

"Jesus is an irresitable and adorable lover. The mercy of Jesus enchants me. How could one not love Jesus will all one's heart and soul?" -St Gemma Galgani
Share