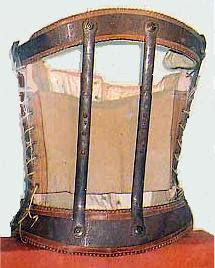 St Gemma -The Patron Saint of back pain and more…


Saint Gemma is commonly considered the Patron Saint of Pharmacists, loss of parents, those suffering with back illnesses, back injury or pain, those struggling with temptations and those seeking purity of heart. The following are explanations of why she is the patroness of each.

Patron Saint of those suffering with back pain, spinal injury or illnesses.Beginning in early 1898, Gemma became seriously ill with what was believed to be spinal tuberculosis. Not only did her back pain become severe, it also became necessary for her to wear an iron back brace (see photo of Gemma's back brace above), and as the disease progressed, she eventually became completely bedridden, being able to move only her head and arms. This spinal diseased progrssed for about one and a half years, until her miraculous cure on March 3, 1899, after making a Novena to the Sacred Heart of Jesus.

To begin with, the spinal tuberculosis and accompanying spinal tumors were diagnosed late because Gemma experienced a feeling of extreme repugnance at the very idea of medical examinations. She mentions these details herself in her Autobiography:
“Already for a long time I had felt pain in that part, but I did not want to touch it or look at it, because when I was a little child I had heard in a sermon that our bodies were the temples of the Holy Ghost. These words impressed me, and so far as I have been able I have carefully guarded my body. What agony I suffered when I had to submit to a medical examination. Every time I heard the doctor coming I used to cry. "

But since Gemma's back condition was continually growing worse she could no longer hide it. She was now subject to violent headaches. She became deaf. Her hair fell out, and her members became paralysed. The doctor was sent for. Her Aunt, Elisa Galgani made good use of the authority she had over Gemma, for she knew that her desire to be obedient was the only means of overcoming her repugnance to seeing a doctor.

At his first examination, Dr Del Prete found that Gemma had an advanced abscess in the lumbar (lower back) region, which seemed to communicate with the spine. To make sure he decided upon a consultation, and the result was a verdict that she was suffering from tuberculosis of the spine -a serious disease and very difficult to cure.

The first abscess was followed by another. It was lanced again and again and medicated glycerine injected into it. When Gemma heard that among other remedies the doctor intended to try the cauterizing iron, she asked him smilingly as if the question referred to some other person: 'Doctor, are you going to do the cauterizing?' During that operation the patient, as is easy to understand, suffers a great deal, but on the testimony of the doctors Gemma never uttered a word, and bore the pain calmly and almost with indifference.

These remedies made her no better, and she passed her days and nights lying in the same position, unless someone helped her to change it. And in this state she remained for a year. After the operation referred to above she had to wear an iron corset, which had to be ordered from a man in Pisa named Redini, who came on purpose to Lucca to fit it on. It was very heavy and uncomfortable according to Elisa Galgani--and Gemma, who wore it day and night with only her hands free, was as it were crucified. Her confessor, Monsignor Volpi, who was at this time spiritual director to the Visitation Nuns at Lucca, had spoken about her, and so had Father Andrew Bartoloni, the parish priest of St. Frediano's, who came frequently to visit her and to bring her Holy Communion. The latter deposed:

‘Every Saturday I brought her Holy Communion. She used to go to confession to Monsignor Volpi, who is my cousin. She was attacked by a disease which some said was spinal; others said it was paralysis, others Pott's disease (spinal tuberculosis). I could not say exactly. It was for the fifteen Saturdays called the Saturdays of Pompei that I brought her Holy Communion. I brought her Holy Communion on a few other occasions, for she was ill for many months. On one occasion when I visited her I had just returned from France, where I had said Mass at Paray-le- Monial. She seemed very interested in the Sanctuary there and asked me about the devotion to Blessed Margaret Mary which was practised there.' 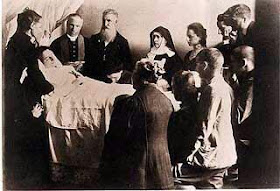 And while Don Andrew Bartoloni was answering Gemma's questions, on his side he received, in compensation, great edification. He tells us this himself:
‘Through her illness she was, as it were, rigid. She could raise only her head and shoulders a little. She used to say to me: " See, I am crucified; I cannot move." But nevertheless she never uttered a word of complaint. She was always jovial, smiling and peaceful. It seemed to me that she had a most extraordinary resignation. She had her Rosary or a holy picture always in her hand or under her pillow. Even the family seemed peaceful, because Gemma was so calm. Sometimes when I was leaving the house, they said to me: "Isn't Gemma remarkably resigned?"
By the beginning of January 1899 she was completely bedridden due to the continuing debilitation of her spine, with little hope for recovery. As a last ditch effort, on January 4th, the Doctors cauterized her in 12 places along her spine. This procedure did not help whatsoever and she grew steadily worse. Fearing death was near, on February 2nd, 1899 she was given Viaticum (Extreme Unction or the Sacrament of the Sick as it is known today). In her Autobiography she writes-
“On the second of February I confessed and I received Viaticum and awaited the moment for going to Jesus. The doctors, whispering thinking I could not hear, said among themselves that I would not live until midnight. Viva Jesu!”

To summarize the remainder of what happened, she was miraculously cured with the help of Venerable (now a Saint) Brother Gabriel Possenti C.P. on March 3, 1899, the First Friday of the month, which is devoted to the Sacred Heart of Jesus, after making a Novena to the Sacred Heart of Jesus. Br. Gabriel appeared to her each night of the Novena in a series of visions and encouraged her, and helped her to pray the Novena prayers. Concerning her miraculous cure in her Autobiography she writes-
"I sent for my confessor and went to Confession. The next morning I recieved Communion. What happy moments I spent with Jesus! He kept repeating to me, Gemma, do you wish to be cured?" I was so moved that I could not answer. Poor Jesus! The grace had been given. I was cured.
"My daughter" Jesus said, embracing me. "I give myself entirely to you and you will be entirely mine"
On that morning, she left her sick bed for good, however, her spine and the surrounding muscles were not completely healed, and she continued to wear the iron back brace for two more months, until God in His goodness and mercy, chose to cure her completely. Concerning this, in her Autobiography we read that two months after her miraculous cure, thus no longer bedridden and able to walk, she made a retreat with the Visitandine Sisters (Nuns of the Visitation of Mary), hoping to obtain admission as a Nun in their Order.

“With the permission of the Mother Superior and the entire community, I then asked permission of the Archbishop to remain there, but he would not grant it, saying that my health was still so poor that I was wearing an iron brace on my back to hold it straight (I haven't the slightest idea who told the Archbishop). The Mother Superior commanded me under obedience, therefore, to take off the back brace. I wept on receiving this command because I well knew that I could not do without it. I ran to the novitiate and prayed to my dear Child Jesus. Then I hastened to my room. I took it off, and though nearly two years have passed since then, I have never worn the brace again and I am doing very well.”
Therefore, those suffering from back pain or back injuries have a most compassionate and understanding patron and friend in Saint Gemma!
Here is the account of St Gemma's miraculous cure:
http://www.stgemmagalgani.com/2008/11/st-gabriel-possenti-miraculously-helps.html

As stated at the beginning of this article, Gemma is also the Patron Saint of those struggling with temptations and those seeking purity of heart. An explanation for this can be found here:
http://www.stgemmagalgani.com/2009/04/st-gemmas-heroic-chastity-and-purity.html
In light of this patronage, here are a few examples of Gemma’s desire for purity:
Writing to her spiritual director-


"Oh Father, what terrible temptations these are! All temptations are painful, but these against holy purity torment me the most! What I undergo is known only to Jesus, who secretly guards me and He is pleased with me."
In ecstacy she says-


"....But to come to heaven requires purity of heart; give it to me, my Jesus....Yes, I so desire purity of heart!"
In her childhood, Gemma’s saintly mother Aurelia taught Gemma to say 3 Hail Mary prayers, kneeling with her knees on top of her hands, while praying to the Blessed Mother for purity. Gemma continued this pious practice until her death.

She is also the Patron Saint of Orphans (loss of parents) because her mother (Aurelia) died when Gemma was only 8 years old, and her Father (Enrico) died when she was 18, leaving Gemma and her remaining brothers and sisters orphaned and in poverty –the poverty due to her fathers illness prior to his death..

Finally, St Gemma is the Patron Saint of Pharmacists because her Father Enrico was a Pharmacist, and supported her and her family in this occupation until his early death at age 57.

Those who suffer with back pain or spinal injuries may be inspired to read here of a recent grace given to a back injury sufferer who received the heavenly help and intercession of Saint Gemma.

“What is sweeter than to be filled with the thought of Jesus, and to kneel before that Divine Victim of love and sorrow—A Victim for my sins, my salvation and for the salvation of souls?" -St Gemma Galgani
Share